But calling for his resignation is another matter entirely.

Cuomo’s own party, outside of New York politicos, is largely staying out of the controversy as Democrats say that they are waiting for the New York attorney general to complete her investigation into his actions. While Cuomo is a prominent Democratic official, senators see little reason to weigh in on a scandal that doesn’t touch one of their own.

Sen. Mazie Hirono (D-Hawaii) went the furthest of any Democratic senator asked about the issue. Although she put trust in the attorney general’s investigation, she suggested that “there may come a tipping point with regard to Gov. Cuomo where he should resign.”

The #MeToo movement that erupted into a nationwide confrontation of sexual harassment in 2017, fueled in part by Donald Trump’s election, ended the careers of members of Congress in both parties. Perhaps no one became a bigger symbol of the Democratic Party’s attempt to enact a political zero tolerance policy for sexual harassment than Sen. Al Franken (D-Minn.), who resigned after seven women accused him of touching them inappropriately. But senators view the allegations against Cuomo differently than those against Franken, who was a colleague.

While Cuomo is well-known and could run for higher office, senators are largely leaving it up to New York state officials to decide the governor’s political fate.

“I’m glad there’s going to be a very rigorous investigation by the attorney general. The most important thing is that the women be heard and taken seriously,” said Sen. Debbie Stabenow (D-Mich.). As to whether Cuomo should step down, she said: “At this point I think people in New York need to decide that.”

Democrats also decried allegations of sexual assault against Justice Brett Kavanaugh during his Supreme Court confirmation fight, but that situation was even more distinct: Kavanaugh was a nominee that they had an obligation to vet.

“One of the baselines is that claims like this should be investigated. You now have an investigation in New York by the attorney general, and I assume she will make recommendations,” said Sen. Sheldon Whitehouse (D-R.I.). “So the difference is — Al never got that.”

Sen. Roger Wicker (R-Miss.) predicted Cuomo was a “goner,” but compared the governor’s situation to Franken’s this way: “The Senate polices its own.”

New York’s two Democratic senators, Majority Leader Chuck Schumer and Kirsten Gillibrand, have strongly endorsed the attorney general’s investigation into Cuomo. Although Cuomo said he plans to cooperate with the investigation and apologized for making the women uncomfortable, the governor made clear Wednesday that he has no intention of resigning. In addition to sexual harassment allegations, Cuomo also faces an investigation into his handling of nursing home deaths during the pandemic.

So far, Rep. Kathleen Rice (D-N.Y.) is the only member of the state’s delegation to call for Cuomo’s resignation. Rice urged Franken to step down during his own #MeToo flap in 2017 days before Gillibrand became the first senator to call on her colleague to leave office. 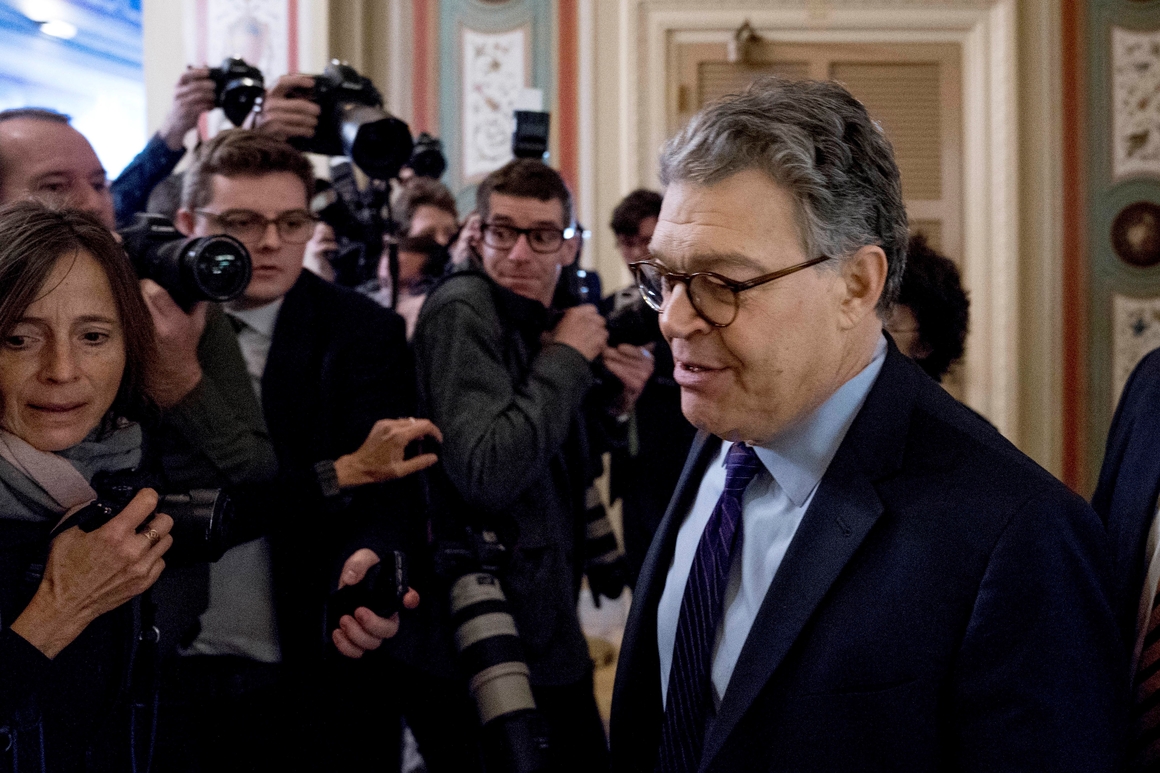 Other Democratic members of the New York delegation, including Rep. Alexandria Ocasio Cortez, are waiting for the investigation to play out. Rep. Yvette Clarke told reporters that she is “a really big fan of due process,” while Rep. Gregory Meeks described the issue as a “very, very serious thing.”

The allegations against Cuomo began last week, when his former aide, Lindsey Boylan, wrote an essay that accused the governor of asking her to play strip poker and of forcibly kissing her on the lips. Days later, a second former aide, Charlotte Bennett, said that Cuomo asked her about her sex life, including whether she’d consider having sex with older men. A third woman, Anna Ruch, came forward this week and said Cuomo asked her if he could kiss her at a wedding reception.

“Any public official has to realize that what they say in the workplace is subject to scrutiny,” said Sen. Bob Casey (D-Pa.), who declined to weigh in on Cuomo’s future. “In these instances, these women are having a difficult time and are under a lot of pressure coming forward. And they’ve got to be heard. It’s more than just a review of actions. Things that you say are relevant.”

Some in the GOP see a double standard in Democrats’ treatment of Cuomo compared with other high-profile misconduct allegations, although Trump faced more than 20 allegations of sexual harassment and assault, which Republicans rarely addressed. The former president has denied any wrongdoing.

Even so, outside of Schumer and Gillibrand, several Senate Democrats said that they are not paying much attention to the Cuomo controversy and showed little eagerness to talk about it.

Sen. Sherrod Brown (D-Ohio) said he did not live in New York and has “zero thoughts.” Sen. Catherine Cortez Masto (D-Nev.) said she is focused on President Joe Biden’s coronavirus relief plan. When asked for comment, Senate Majority Whip Dick Durbin (D-Ill.) said he had the “the same one everyone else is making: complete the investigation.”

One senator, addressing the thorny topic on condition of anonymity, said that Democrats have been reluctant to publicly call on Cuomo to resign despite having no tolerance for sexual harassment allegations because it’s a controversy in another state. Constituents don’t want senators meddling in other states’ business, the senator added.

Sen. Lindsey Graham (R-S.C.), who berated Democrats for their treatment of Kavanaugh during his confirmation, said that his colleagues are “wrapped around the axle.”

“They were loud, vocal, ‘Kavanaugh needs to go’,” Graham said. “Now they got somebody, a prominent Democrat, and they’re figuring out how to handle it. Here’s my advice: Handle them all the same. That way you don’t have to worry about it.”

Anna Gronewold contributed to this report.