It’s not just the Senate majority on the line in Georgia’s runoffs. It’s also Joe Biden’s chance to reshape the courts.

Should Senate Republicans win the fight to keep their majority, Senate Majority Leader Mitch McConnell will have unilateral authority to stifle Biden’s picks to the federal judiciary, weakening Democrats’ hopes to make up for four years of confirming conservative judges and two years of a McConnell blockade during President Barack Obama’s final years.

While an increasing number of Republicans say they’re willing to work with Biden on his Cabinet nominees, Senate Minority Whip Dick Durbin isn’t optimistic about GOP cooperation on judicial nominees. In an interview, Durbin, who is vying for the top spot on the Judiciary Committee, predicted Biden will have “very little” impact on the federal judiciary if Republicans keep the Senate in January and remained skeptical they’d approve his appointments to the federal bench.

“If the last two years of the Obama administration were any indication, they’ll freeze them out,” Durbin said. “Hope springs eternal but I believe in history.”

Biden, who chaired the Judiciary Committee from 1987 to 1995, will be confronting an institution that’s only become more partisan since he left it, especially when it comes to the courts. Last month, Amy Coney Barrett became the first Supreme Court justice in 151 years not to receive a single vote from the minority party.

Even though most Republicans still won’t recognize that Biden is the president-elect, Sen. Chuck Grassley (R-Iowa), the top Republican on the Judiciary Committee next year, said that he would “of course” consider Biden’s judicial nominees. If Republicans keep the Senate, they’ll be in the unusual position of vetting and pushing through the minority party’s nominations. President George H.W. Bush was the last president to take power without his party in control of the Senate, though Republicans only held the Senate for a few months during the beginning of his son’s presidency.

Members of both parties acknowledge that with a divided government, Biden’s nominees will need to be a compromise, like everything else.

“If we keep the Senate, then it’ll be a negotiation,” said Sen. John Cornyn (R-Texas), a member of the Senate Judiciary Committee and McConnell ally. “Perhaps [Biden] will welcome the fact that the most radical nominees will not be confirmed by a Republican majority. That we’ll actually have to negotiate and come up with something that’s agreeable to both sides.”

But negotiation could prove challenging, particularly given McConnell’s affinity for filling the courts with conservative judges and the hard line some Senate Republicans have already taken on judicial nominees, even with a Republican president.

“I imagine they’ll have a tough time just because I’m not going to vote for people who I think are, to use my words, ‘judicial imperialists,’” said Sen. Josh Hawley (R-Mo.), whose opposition helped sink Trump’s nominee to the 5th U.S. Circuit Court of Appeals. “But maybe he’ll surprise me if [Biden] is indeed the president, who knows, maybe he’ll send up nominees who are constitutionalists and textualists. I kind of doubt it.”

In addition to a possible Republican Senate, Biden will take office with far fewer vacancies than Trump, who entered the White House with 112 vacancies, including a Supreme Court seat, 86 district court seats and 17 circuit court seats. Obama, by contrast, had 53 vacancies. Since Trump’s inauguration, the Senate has confirmed well over 200 judges, including three Supreme Court justices.

There are currently 59 vacancies to the federal judiciary, with 36 nominees pending including one appellate court nominee and 27 district court nominees. Senate Republicans are planning to continue confirming judges throughout the lame duck session.

“The good news is that we’ve done a good job — and we’re not done as you know — filling the vacancies that there are on the appellate courts to minimize the opportunity for more liberals on it,” said Sen. Kevin Cramer (R-N.D.). 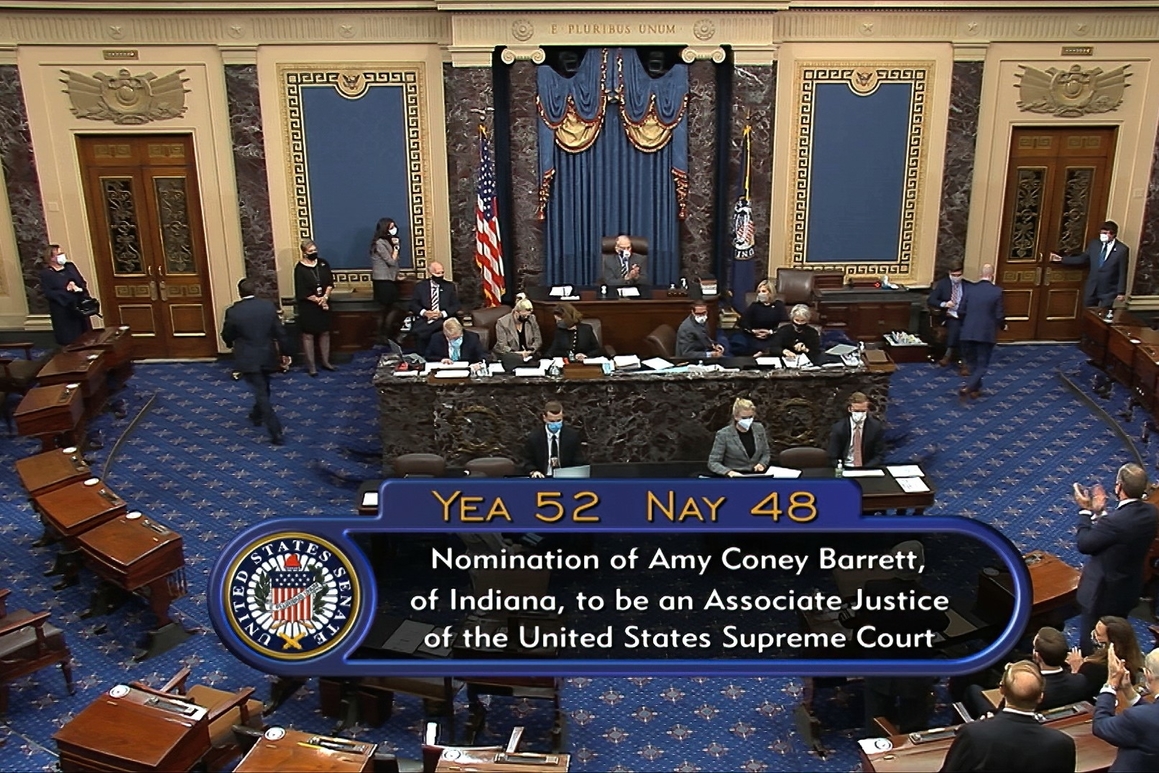 Even though Republicans have maintained a relentless focus on judges, vacancies during the Biden presidency will inevitably arise. And he may even see a Supreme Court retirement. Justice Stephen Breyer, nominated by former President Bill Clinton, is 82. Some judges have also delayed retirement, with the hope of a Democratic president taking office. The question will be whether Republicans allow Biden to replace them.

“There’s vacancies that you can predict because of age, but then there’s all these others,” said Sen. Tim Kaine (D-Va.). “He’ll have a number of opportunities I’m sure … maybe not immediately just because vacancies have been filled, but over the course of four years I think he’ll have quite a few.”

Both Democratic and Republican senators suggested that Biden may have an easier time filling vacancies for district court nominees because of the so-called blue slip process, under which a home state senator has input over whether the Judiciary Committee considers a judicial nominee. Republicans scrapped blue slips for appellate court nominees — a heated point of contention with Democrats — but have kept them for lower court picks.

A Republican Senate also takes the prospect of court reform off the table. Democrats are still seething over McConnell’s blocking of Obama’s Supreme Court nominee Merrick Garland in 2016 as well as the rushed Barrett confirmation, and some on the left have called for adding seats to the high court. Biden stayed away from court packing during his campaign and instead proposed a bipartisan commission to review court reform proposals. But with the GOP in control, Biden’s only prospect for impact on the courts would likely be who he nominates to the federal bench.

The president-elect’s allies are hoping that Biden’s longstanding relationship with McConnell and Senate Republicans will translate to his nominees getting confirmed, though McConnell has yet to even acknowledge that Biden won the White House.

“Joe Biden ran for president on bringing us together and making the Congress work again as one of his core priorities,” said Sen. Chris Coons (D-Del.), a Biden confidant. “If anyone can sit down and work out with [McConnell] … a way to come to an agreement that we will move nominees, it’s President-elect Biden. I have lived through years and years of McConnell’s obstruction. I know this will be a challenging task.”

Biden’s presidency will ultimately serve as a test for whether both parties can move past the brutal battles over the nominations of Garland, Barrett and Supreme Court Justice Brett Kavanaugh, as well as the partisan finger-pointing over Senate rules changes. Republicans often highlight that Democrats lowered the 60-vote threshold for confirming lower court judges in 2013. But Democrats are quick to counter that it was McConnell who gutted the filibuster for Supreme Court nominees in 2017.

Some Democrats are trying to keep an open mind about the possibility of divided government and are reluctant to predict how their Republican colleagues may act next year.

“I know how Mitch McConnell approached Obama’s nominees which was not a very hospitable approach,” said Sen. Chris Murphy (D-Conn.). “I can certainly try to predict McConnell’s future behavior by past behavior but hope springs eternal. I would hope that we don’t end up in a place where McConnell is trying to keep vacancies open for 2025.”

Burgess Everett contributed to this report.

Manchin wants to make filibuster ‘painful’ to use

Manchin dismisses concerns that he would have tanked relief package

‘It is a trap!’: Inside the QAnon attack that never happened